To Be a Better Leader – Talk Less, Listen More!

Great leaders listen. They listen to understand where their team members are at and what sort of obstacles they are facing. Great leaders use this information to craft personal strategies that work specifically for each team member, rather than squeeze everyone into a one-size-fits-all approach.

John, a Fortune 500 Sales Director, recently went through leadership coaching with me and we worked through what he needed to do to become a better listener and a better leader. 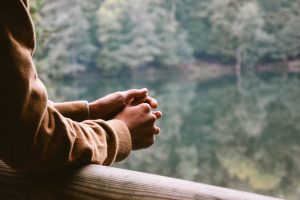 As a Sales Director, John pays close attention to numbers. The unwritten rule for success means hitting 100% of the sales goal.  John’s team had met 97% of their sales goal for the quarter – was it a failure if his department missed by three percentage points? Morale was up and down. John wanted to understand what he could do better to help his team.

John and his team were stuck in a limiting framework for success that stifled their enthusiasm and added stress to their daily work environment. During his business coaching sessions, John began to understand how he could redefine what success meant.

Sales organizations are often hyper-focused on numbers, which can cause them to overlook the other successes they have accomplished. John’s team managed the most difficult segment of customers in the organization and the internal processes didn’t work for these customers. As the team drove against goals, issues were constant. As issues arose, positive solutions were not far behind.

Re-examining what his team had actually accomplished, helped John realize that:

Positivity is one of John’s Top CliftonStrengths. John is an engaging and likable leader. He’s charismatic, has a wonderful sense of humor, and always looks on the bright side. Characteristics every great sales leader should have, right?

John’s persistent positivity meant he sometimes came across as too much of a cheerleader and not enough of a listener. John thought his team needed a positive leader, but his excitement sometimes had the opposite effect. Instead of feeling lifted up, they felt misunderstood.

I thought, you take your team to an off-site, you pump them up,
you do some role play training and best practices,
and you rally them – you’ve GOT this.

Excitement isn’t a bad thing. However, it may not be what the team needs when the team is feeling low. Sometimes positivity can come across as insensitivity. Amanda asked John to think about the difference between positivity and optimism, excitement and enthusiasm.

She invited him to consider how choosing to embody optimism and enthusiasm might shift, perhaps radically, how he showed up as a leader for his team. She emphasized how important it was for him to be intentional with his words and embody the right words.

Being positive and getting excited aren’t ‘bad’. But, you have to be thoughtful and intentional when your team is going through a really difficult time. As a leader, I had to ask myself, ‘What’s the impact of how I’m showing up? Am I meeting my team where they’re at?’ I discovered that if I wasn’t being real and open around issues and talking about them with my team, I was going to miss out on a lot of things. And actually, in fact, I was having the opposite impact from what I intended.

Sales organizations often have a culture of chaos, rapid change and a laser focus on results.  However, John learned that he had to acknowledge the concerns of his team – both the spoken and unspoken – and their discomfort with being in unfamiliar territory (not meeting sales goals). Simultaneously, he needed to keep them focused on what was within their control. John commented: I needed to create space for our current reality, as well as allow room for optimism during some of those difficult times, in order for my team to feel safe.

He wanted his team to feel good about coming to work, and he wanted them to work as a cohesive unit with resilience and a sense of satisfaction in what they accomplished.

The example John set as a leader was the key to that: ‘As I progress as a leader, I keep thinking about the amplification of what I do and how I do it.’

The Importance of Listening

When you listen to gain an understanding, you allow yourself to see things from the other person’s perspective. Putting yourself in their shoes makes them feel valued and understood.

When you’re having a one-on-one with someone, what really matters is how they feel, not the point you want to make. 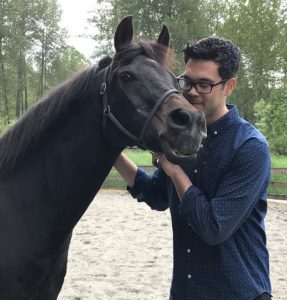 John also worked on how to better communicate his openness, empathetic listening, and availability non-verbally. He wanted to make sure he wasn’t putting anyone off through subconscious, non-verbal cues.

As part of his coaching program, John experienced some individual coaching sessions with horses to help better understand the impact of his non-verbal behavior on others. He considers his work with the horses to be “the most tangible example of what it feels like to be a leader.”

The horses show you how important it is to embody that leadership principle and carry yourself in the physical world. The horses pick up on your energy, positive or negative, your decisiveness and confidence. That has so many tie-ins with managing people. It was really profound. 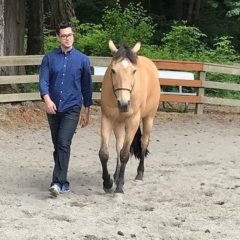 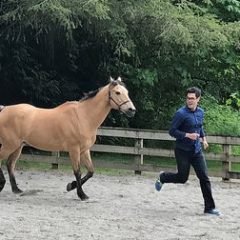 When and if a horse follows you offers insight into your connection with others. 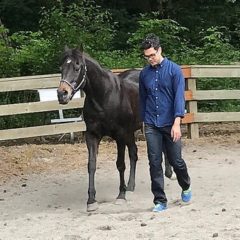 Reflecting on the journey together builds shared success.

John changed his sleeping habits and caffeine consumption to see if they would make a difference in his energy levels. He also began a daily meditation practice to help keep his body and mind more present.

Just as his team was hitting a solid stride, the business had a re-organization. His team changed and he inherited another tremendous set of challenges.

John knew that in the past, he would have experienced significant stress. He would have also put himself under tremendous pressure to ‘fix it’. But, this time around, he gave the team time to solve it themselves. He had the skills to handle the situation much differently.

John hit his numbers that quarter and his team felt closer than they ever had.

I looked at the big picture: I hadn't missed my numbers before. But, I know now that the numbers don't define the total effort. I kept my sights on what my team could control and what we could do. We focused on our long-term strategy. I stayed calm, which helped everyone keep calm, even though everybody was feeling a lot of pressure and the numbers started in the red. In the past, I think I would have probably put a lot of pressure on my team and tried to drive a bunch of activities. This time, because of my coaching, I know my job is to stay consistent. Low and behold, two months later we were in the green. The team is doing better than ever, we’re closer than ever. We didn't have any difficult patches. We just had a difficult set of circumstances that right now we've overcome.

John’s consistency and ability to remain calm completely changed the way he led his team and helped to set them up for success.

We asked John what he thought of his coaching experience and what advice he would give to others going through the same experience.

Amanda is not afraid to challenge your thinking. When you bring a problem to her, she will challenge you. You’ll leave with shifts in your perspective, and clear next steps to practice with your team. The more you bring the results back to her, the better you will get. The more open you are, the better you will get. See the coaching and the assignments she gives you through. The more open I was to actually do what she suggested, the more I learned. I've actually asked for more coaching because I've enjoyed the sessions so much.

If this sounds like something you can relate to or you are looking for some helpful insight on how you can take your leadership to the next level, then connect with Amanda Madorno at (425) 488-7747 or send her an email today.